The History of Pewter 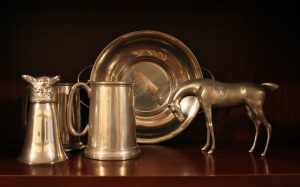 When you hear the word Pewter, the silver-grey tarnished pub tankards come to mind. However, before the silver gifts for men, there was a scintillating story behind the word. For instance, Svenskt Tenn, a renowned Swedish design and interiors company was founded on Pewter. In 1924, Estrid Ericson, an art teacher opened the Firma Svenskt Tenn Shop in Stockholm to sell pieces of pewter, the most exciting materials at that time.

Currently, the firm has expanded to cover everything about interior design. It’s famous for working with Josef Frank, a renowned architect-designer, and still sells some of the original pewter designs. These include the iconic ‘Brännvinsfisken’ schnapps flask, one of the fish-shaped and iconic designs by Estrid as well as other dreamt-up pieces over the decades. The collection includes vases, candleholders, jewellery and teapots. All the gems are shiny and modern.

Polished pewter is found in a white colour. It might appear glorious now but it was once the poor cousin to the silver option. Therefore, if you had a choice between the silver and the white option, most people choose the silver. Antique pewter is still used for interior styling since it’s far from becoming fusty. It works well with a lot of interior options such as English or Swedish country houses.

For instance, a huge charger full of lemons placed on a contemporary table looks appealing. Pewter is an alloy of tin as well as small quantities of different metals such as antimony, copper and bismuth. Dating as far back as the Bronze Age, it is one of the oldest manufacturing industries still in existence today. There’s very little archaeological evidence in existence today because it has a low melting point.

As such, the older pieces were often melted with the changing fashions. The earliest piece of pewter to be found is an Abydos flask. It was located in a tomb in Egypt dating as far back as 1450BC. Pewter has been around for the last 3000 – 4000 years. However, it wasn’t found in England until the Roman invasion. Romans invaded England for the tin supplies. They had known how to make pewter for at least 2000 years. The best pewter contains at least 85% of tin.

In the 17th century, pewter reached its peak. Every tavern and home had pewter plates, jugs, buttons, tankards, toys, wine cups, candlesticks, inkwells and spoons. Famous Dutch still paintings of the 17th century feature pewter ewers and flagons. In the 18th century, thanks to the introduction of tea-drinking closely followed by the Industrial Revolution, the pewter industry shrank and new wares mostly included pub mugs.

In the late 19th century, there was an Arts and Crafts movement, during which Pewter underwent a short renaissance. It was also during the early 1900’s art nouveau movement. Archibald Knox mastered the use of pewter as a material and designed various things such as tea sets, clocks, vases and inkwells. These were in the Tudric range at the London fashionable Liberty Store.

Note that pewter always comes back into fashion before going out again. A few good examples of art nouveau include expensive pewter areas. Currently, a Liberty pewter piece designed by Archibald Knox can fetch £5,000 to £20,000. Renowned dealers like Fontaine sell decorative 18th and 19th-century pewters for £50 to £100. A lot of decorators are using pewter and it’s more fashionable with every passing moment. It can be used in restaurants to make dressers or cabinets look good.

Everything You Need to Know About a Drum Pump

How Philanthropic Giving Benfits Your Company

How Philanthropic Giving Benfits Your…