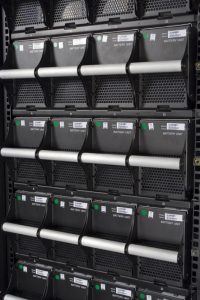 What’s a UPS Battery Used For?

A UPS battery system can help protect you against loss of coverage in case of a power failure whether you are powering a series of surveillance cameras or critical medical equipment. UPS is an acronym for Uninterruptible Power Supply, which is a component that responds to power failure instantly. However, it isn’t the same thing as a battery backup. If you want to make the right choices for your power needs, it is critical to understand the differences between these two systems.

What’s a UPS Battery Designed to Do?

The UPS battery system acts a stopgap between your main and backup power source. The problem is that with even the most robust battery generator or backup in place, it can be up to several minutes before your system responds to the loss of your main power source and starts drawing from the backup source.

In banks, hospitals, and other essential functions, these precious few minutes could be a matter of life and death. The UPS has been designed to solve the problem by responding instantly and providing a big power boost to the system before handing off things to the backup power system once it is up and running.

What Does a UPS Battery Not Do?

The key thing you need to understand is that a UPS system isn’t designed to be a standalone backup system. The battery that’s connected to your UPS system cannot handle a sustained load for more than just a few minutes. It is thus critical to have a full-scale backup system ready to take over within the shortest time possible.

Other Functions of the UPS System

The main function of the UPS battery is to cover the gap between power failure and backup power, but it can also be used to increase the reliability of your system under regular conditions. This is because the UPS must be ultra-sensitive to fluctuations in the incoming power supply to respond immediately the power goes out.

If you are currently in an area where there’s unstable power, such as a rural hospital or field office, the UPS can help keep the power level during turbulent spikes and dips from the main power source. In such a situation, the UPS never actually hands responsibility over to the backup system, but rather plays an important role by providing short power bursts to fill gaps before everything returns back to normal.

This is only possible if the UPS device is installed as an intermediary between the main power source and the equipment being protected, which inevitably means that it will be the first point of reference in case of power failure. Such a setup also allows the UPS system to recharge its own battery constantly in mini-cycles as it works.

One good way to ensure that every moment counts once the power goes down is to add an Uninterruptible Power Supply to your current setup. You don’t want to be struggling with starting up a generator unless you are sure that a UPS is on board and ensuring that everything stays safe.

Check out the APCRBC113 battery for more information.

Working in Education: Is It for You?

Everything You Need to Know About a Drum Pump

How To Find The Same Day Movers

How to Improve the Bad Credit of Your Business

A Complete Guide for Beginners About Ecommerce SEO

5 Strategies for Increasing Conversions in…

How To Find The Same Day Movers

How to Improve the Bad Credit of Your…

A Complete Guide for Beginners About…