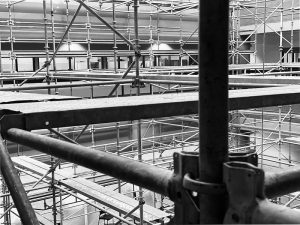 Is the coronavirus going to impact the scaffolding sector? It is spreading like wildfire, so the concerns are valid. Not only that, but worldwide there have been over 100,000 cases, and many people in the UK alone have caught the virus.

If the situation gets worse, then the government appears ready to take more drastic measures, which include potentially closing down schools and cancelling events. Other potential action includes banning large public gatherings and requiring people to work from home if possible. Working from home is not possible for those in the construction industry, including the scaffolding sector.

There are reports that have stated that around 80% of workers won’t be able to continue to work during peaks of the virus. There is evidence that shows the virus has penetrated the scaffolding industry. In fact, a worker at one of the buildings that EDF (an energy firm) owns contracted the virus.

Supply chains are expected to be impacted too. This is because many materials in the industry are imported. In fact, they are imported from China, which is the epicentre of the virus.

Scaffmag spoke with scaffolding company APL Kwikform. They said that over the winter months and up to February, they used its full productivity capacity. They continued to expand its stocks at their Germany-based factory, as well as their service centres located around the world.

The company had to do this so they would be prepared for spring and summer. Brexit brought uncertainty into the mix. This is why the UK was maintaining high levels of stock. The company also said they have large stocks of raw materials that come from suppliers that are not just from China, which is why they should be alright for many months to come.

In March lockdown measures were announced, and this led to scaffolding courses being halted. This also meant that vital training could not be provided to scaffolders across the UK. As a result of this, many workers are in limbo and are having to wait before they can take part in training, which is necessary in order to maintain high levels of safety in the industry.

Newcomers and seasoned professionals both take part in training, but they all have had to step back from any potential courses they were going to take. Not only that, but training is crucial because it continually adapts to changes in laws and practices. This is one reason experts have turned to other ways in order to allow workers to continue to learn.

The government made it known it had hoped that construction work could continue. This was their attitude right from the onset of the pandemic. Of course, they wanted restrictions in place to allow this. However, there are challenges that workers face if this is to happen, and this is on top of all of the other risks that are typically present on worksites.

Workers also have to maintain social distancing, according to the government’s guidelines. It’s worth pointing out that a lot of the guidance is generalised, and this is why SIMIAN has been working hard to figure out how this guidance can be applied in the scaffolding industry. We’ve showed our clients our own internal Guidance for Scaffolders, and we will continue to revisit our guidance as time goes by.

Our customers are adhering to guidelines, including the social distancing guidelines. The way they are doing so is by doing the following:

Besides the above, customers are also stepping up their cleaning. Many are now consistently cleaning equipment. They are also cleaning buttons, handles and other common points that are constantly touched on a regular basis.

Why Your Business Should Be Investing In Work Phones

Know When Your Business Needs IT Consulting Services

Why a Managed Service Provider for Your Business?

Is Customer Service the New Marketing?